Back to all posts
Home
/
News
/
Who Betrayed Adaka Boro? 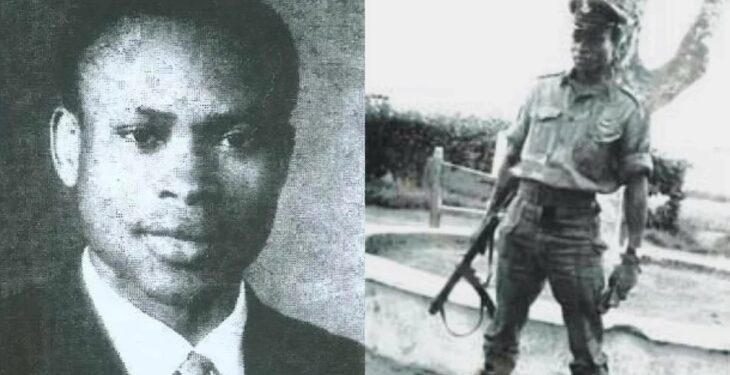 Who Killed Adaka Boro? Why the Blame on Igbo Accusing them of Betrayal? Was Adaka Boro Betrayed?

I have read many false history that breeds hatred against the Igbo, regarding Adaka Boro. Majority of Ijaw believe the Igbo betrayed Adaka Boro and killed him. This makes me laugh. Ignorance is a disease. Lack of history, Maazị just shuddering in disbelief that people can be so gullible to peddle falsehood for what gain?

Who is Adaka Boko? Isaac Adaka Boro was a University of Nigeria, Nsụka’s student. He was also the SUG president of the said university. He failed election two times before he won, then blamed his failure on Igbo, claiming he lost because he was Ijaw and suffered tribalism in his region. Remember, Adaka Boro was enjoying the scholarship of Eastern Region Government. He was on free education. He hailed from Oloidiri, Bayelsa. He was the first person to declare secession in 1966 at the age of 27.

Adaka Boro’s rebellion was sponsored by the Tafawa Balewa government. Tafawa Government believed that the NCNC and AG were sponsoring the Tiv unrests and the UMBC led by Joseph Tarka. To deal with NCNC, Adaka Boro was sponsored to caused insurrection with his boys. They began to destroy things. Adaka Boro used his father’s backyard as a training ground to arm his boys.

As Ironsi took over, through MD Yusuf, CID chief, he noticed that the Adaka insurrection was a Balewa’s plan, he issued military order and Boro was arrested and incacerated for 2 weeks. Remember he was causing this unrest before the coup. After the January coup where one of his key sponsors— Tafewa Balewa was killed, Boro was very angry. He called Tafewa Balewa “the projector of Ijaw”.

Adaka Boro declared Ijaw Republic on February 1966, a month after the coup. He was so radical and courageous that as a student, he dragged the Federal Government to court seeking the nullification of the 1963 general election. When he proclaimed the Niger Delta Republic in February 1966, Boro argued that the region where the nation’s wealth comes from had suffered years of neglect and underdevelopment. But scholars believed this was not the main reason of declaring the Niger Delta Republic.

Have you asked yourself why the Niger-Deltan elders including his father didn’t support him? See the reasons according to reviews by scholars.

South African anti-apartheid activist and scholar, Ruth First as quoted by Kathryn Nwajiaku, states that Boro and his men were in league with senior Northern officers, and had wanted to use the threat of revolution to trigger the imposition of a state of emergency by the Northern-led Federal government prior to the first coup. Before the January coup, Adaka Boro and his men were already sponsored by the Fulani caliphate to cause insurrection. His brother confirmed this.

David, his younger brother during an interview with Punch said that his brother received support from the North before the declaration of Niger-Deltan Republic, “Isaac Boro did not just start the 12-Day Revolution and decided to declare a Niger Delta Republic. There was some degree of encouragement from the North.” Boro himself admitted to having close ties with the Balewa government.

The question is, how did 27 year old undergraduate student had funds to secure weapons, mass out thugs and militia? Was he being supported by the elders of Ijaw?
David his brother continued: “Our father advised him against it and told him to face his studies because he was a student”.

Adaka Boro did not just declare Niger Delta Republic, he was fighting the Federal Government under the leadership of Agụiyi Ironsi through his Niger Delta Volunteer Force. He believed that the regime must be dissolved. The Northern leaders funded him to attack the government.

NDVF and the Nigerian forces which is widely known as ‘The Twelve-day Revolution’ led to the death of over 150 people. The armed militia led by Boro was overpowered by the Nigerian forces, while Boro and Samuel Owonaru who was the Chief of Staff of the Niger Delta Volunteer Force and other leaders of the militia group were arrested and charged for treason. When they appeared before Justice Phil-Ebosie of the Port Harcourt High Court. They were sentenced to death but the sentence was commuted to life in jail. Remember, they didn’t just declare independent, but fighting federal forces and killing people.

A year later, following the 1966 Igbo pogrom in Kano that killed over 50,000 Igbo and after the series of counter-coup which killed the First Military Head of State— Agụiyi Ironsi, and also after the Aburi Accord disobeyed by Gowon, Emeka Odumegwu Ojukwu declared Biafra as he was being forced by the Eastern Region Consultative Committee.

Remember at this time, Ijaw elders supported BIAFRA. The name BIAFRA was given by na Ijaw man from Adaka Boro’s tribe and state— Opiogo.

Gowon saw Boro an important tool in his campaign of “quelling Ojukwu’s rebellion” and the opportunity of ingraining the Northern “love and anchor” for the oil Rivers they claimed were “suffering Igbo domination and subjugation”. Gowon released Isaac Adaka Boro from prison and recruited him into the Army in order to fight Ojukwu and the Igbo.

What did Adaka Boro do?

He recruited 1000 Rivers men into Army to fight Biafrans. The Nigerian military led by Adaka Boro killed all their chiefs and elders who were Pro-Biafrans and install young people like Diette Spiff 23 as the governor.

Many of Ijaw elders ran away to exile and never returned because of Adaka Boro. Most of his boys and Federal troops would kill Biafran soldiers, strip their camouflage and used it to constitute different mayhems in the region that people of that place would later accuse it on the Igbo Army. Adekunle the Black-Scorpion committed a lot of atrocities. And you know what? He was working with Adaka Boro.

Adaka Boro led the Federal troops to Igbo hinterland and many places in Rivers and kill the Pro-Biafrans. The worst of Adaka’s atrocity was the Opobo incident.

The first doctor from Etche was killed by Boro led army. He did a lot of things. He took Nigeria troop into Eastern heartland.

What happened was that he started making noise, bragging how he has defeated Biafrans, that was when Nigerian military felt he’s no more important and deleted him. Many fingers pointed at Adekunle who was called the Black scorpion as an instrument for Adaka Boro’s elimination in May 9, 1968 at Okrika, Rivers State. Remember, by this time, Port Harcourt, Uyo, Calabar, Bonny and many other oil rich areas have been captured, there was no need for him anymore. He helped the federal troops conquered these places and of course they ended him just as they ended Ken Saro Wiwa who did the same with Adaka Boro.

The how did Igbo kill Adaka Boro whereas everywhere had been captured before he died? How did Igbo betray Adaka Boro? Someone who killed his people and was used by the Fulani caliphate against himself. Someone who forced Ijaw-Pro Biafran chiefs to exile, dethroned and killed them. How did the Igbo betray him? How and how? Someone who dealt with Chief Opiogo his kinsman for supporting Biafra. Ken Saro Wiwa also used abandoned property to seize Chief Opiogo’s properties in Port Harcourt. Chief Opigo’s (who named Biafra) property is where Rivers State College of Art and Science is currently located.

Like Adaka Boko like Ken Saro Wiwa— then joined outsiders to kill their own out of hate, jealousy and strife; the same outsiders killed them because they don’t trust anyone who killed his own.

In Obasanjo’s Book: “My Command” Olusegun Obasanjo described Boro and his 1,000 soldiers as “ill-disciplined, hurriedly and poorly trained Rivers men,”.

Alabi-Isama’s book paints picture of his death in Okrika to be a clean off from scene. Use and dump. Someone who organised barracks to train Nigerian military and use paddling techniques and many more to lead federal troops to kill the Igbo. That was how Adaka Boro destroyed himself by betraying himself, betray his people and got killed by the people he joined to kill his people. Nobody betrayed him.

Micro-blogging platform Twitter rejected the Nigerian government’s demand that the account of the leader of the Indigenous People of Biafra (IPOB) Nnamdi Kanu be blocked, Minister of Information and Culture Lai Mohammed disclosed on Tuesday.… 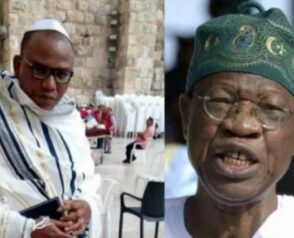