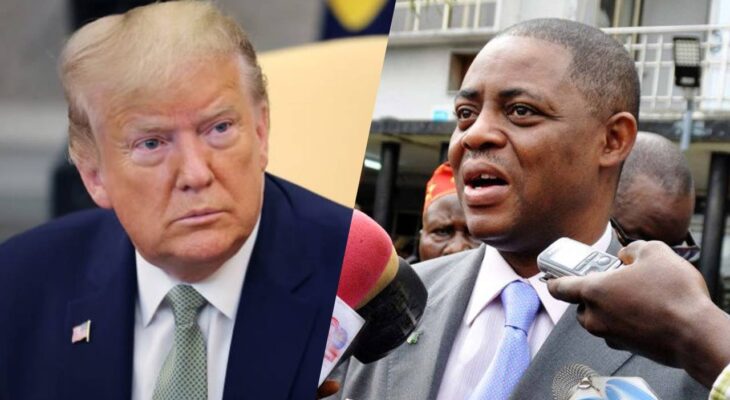 He claimed that the outcome of the presidential poll was “the biggest electoral fraud in history”.

The position of the former presidential aide is contained in his article on Sunday, ‘U.S. election: Before you pop the champagne’.

Fani Kayode said people were believing the “fake news” in major news networks and accepting their narrative that the election was free and fair.

“You can believe anything you like but it is just your opinion; it counts for nothing and it changes nothing. And lest we forget, even Satan thought he had won until 3 days later!

“I continue to stand with Trump and I believe that he will remain President. Why? Because I believe that what is unfolding in America is the biggest fraud in electoral history and in the history of democracy”.

Fani-Kayode added that the alleged cases of illegality will be exposed at the Supreme Court.

Trump is not backing down. He maintains that the November 3 election is not over.

The President has announced that from Monday, his campaign will start a legal action.

However, some Americans are rejoicing that he could be on his way out of the White House.

U.S. ELECTIONS: BEFORE YOU POP THE CHAMPAGNE

“The blue wave has reached its peak and zenith. The red shall rise, swallow it up and overwhelm it. Joe Biden’s dreams shall be dashed, his “victory” annulled and his celebrations shortlived. Donald Trump shall do a second term and the name of the Lord shall be gelection”- FFK (@Realffk), Twitter, 8th November, 2020.

You can scream that Joe Biden has won as much as you like. You can continue to broadcast it on all the television and radio networks and publish and post it all over social media and every newspaper in the world. You can laugh at Trump and insult and mock those of us that supported him.

You can believe the fake news in the major news networks and accept their narrative that the American presidential election was free and fair. You can believe ANYTHING you like but it is just your opinion: it counts for nothing and it changes nothing. And lest we forget, even satan thought he had won until 3days later!

I continue to stand with Trump and I believe that he will remain President. Why? Because I believe that what is unfolding in America is the biggest fraud in electoral history and in the history of democracy and that it will be exposed for what it is at the American Supreme Court.

This is my view and if you like you can hate, insult and mock me for it. Time will tell if I am right or wrong.

Biden represents evil to me for three reasons.

1. He believes in abortion.

2. He believes in same-sex marriage.

3. He seeks to persecute Israel.

Love him all you like but I choose to despise him because I consider these three things to be evil, ungodly and against core Christian values.

Cheer him on and clap for him as much as you choose but I still do not believe that he will ever be sworn in as President of the United States of America.

Even if he makes the magic 270 electoral college votes and people choose to call him the “President-elect” it will still be challenged in court and his so-called “victory” will remain subject to the ruling of the Supreme Court and conditional upon its final decision.

Until that ruling and decision has been made and announced I would suggest that those who are already dancing in the streets and celebrating Biden’s so-called victory should calm down, have a reality check, smell the coffee, get a grip of themselves and keep the champagne in the fridge.

This matter is not over and we still have a long way to go. It is not just a fight for the heart and soul of America but also the destiny of the world. It concerns us ALL and affects us ALL even though we are not Americans.

I thank God for His grace, mercy and power and for imbuing Donald Trump with faith, courage and strength.

These virtues will serve him well in the next few days, weeks and months.

In the end he will be vindicated and he will prevail and those behind this evil conspiracy will know that we serve a mighty God who rules in the affairs of men!

Permit me to end share the deep insight of the respected American-based Mr. Joseph Okechukwu who is an exceptionally bright man and who is an actor, author, activist and one of the leading pro-Trump voices of his generation.

Joseph has shed much light on world events with his remarkable videos and essays over the last few years and his thoughts on what is unfolding in the American election are apt and succinct.

In an essay titled ‘U.S. ELECTIONS: DID YOU CELEBRATE TOO EARLY’ he wrote the following:

“You know, the last 24-48 hours have been particularly challenging, both emotionally and psychologically for Trump supporters worldwide and understandably so.

If you’re on Social Media, by now you must have lost count of the insults and humiliating jeers from the “Bidenians.” And all of that simply at the prospect of a Biden presidency – which at best still hugely hangs in the balance. Imagine if he had truly won?! And these are the same people who would preach “healing” and “building bridges” at the drop of a hat.

Okay, in Pennsylvania where Trump led with over 700,000 votes before they fraudulently stopped counting and began adding votes for Biden with zero added to Trump until “Biden took the lead”, remember? Pennsylvania has now been ordered by the Supreme Court of the United States to Segregate all the votes that arrived after 8pm on the Election Day, November 3.

Keep in mind that Trump was leading with over 700,000 votes at the close of the day on November 3. The votes with which “Biden overtook Trump” mostly arrived in the middle of the night on November 4 and continued to arrive from God knows where until “Biden took the lead” days later. There have been huge allegations with mounting evidences that most of those votes that were mailed in to help Biden were fake and fraudulent.

Trump’s team asked for access to verify the votes, the PA officials denied them access. Even when a local court ruled, they still flouted it. Wonder what they were hiding.

Now, the Supreme Court has ordered for the second time that the votes must be segregated. Justice Alito did. Look it up. Trump team believes that when these votes are segregated, the fraud will be exposed during a recount and Trump’s landslide win will finally be unveiled. How can anybody now call this state for Biden, even if he leads with 1 million votes? Impossible. Gridlock! Litigation!

This is why Donald Trump tweeted this: “Joe Biden should not wrongfully claim the office of the President. I could make that claim also. Legal proceedings are just now beginning!”

This race is nowhere close to over and the media keeps giving them false hopes. Nearly every state that gave Biden the current 253 electoral votes is right now in contest. How can you declare victory under such circumstances? It’s absolutely insane.

Furthermore, Pennsylvania USPS Whistleblower Richard Hopkins has now gone Public; Confirms Federal Investigators Have Spoken With Him About Postmaster Rob Weisenbach’s Order To Backdate Ballots To November 3rd, 2020. When Federal officials step in before 270, that’s huge and if you’re honest, you can see why a Biden “presidency” is too early to call if not altogether a mirage.

Okay, let’s move over to Michigan. You may never see this on mainstream news but do you know that some software glitch in Michigan was transferring Trump’s vote to Biden? So, people will vote for Trump and the software would send the vote to Biden! In one particular polling station, about 6,000 Trump votes went to Biden because of this software. 6,000! They called it a glitch but the Trump team has a name for it. It’s something they already know and I will get to that in a minute.

But here’s what has happened: the so called glitch was fixed in a particular county where Biden had won and instantly, Trump carried that county! No longer Biden! See proof below. And guess what? 47 other counties in the state of Michigan used this same software. It has now been discovered that same software was deployed in many other states, especially the Democrat-controlled states. Now, investigators are looking into all of those. And you wanna call the election?

HAMMER and Scorecard are the names for the software programs said to have been developed by American intelligence agencies for use in controlling the outcomes of elections through algorithms that adjust vote tabulation.

It’s being alleged that elements from the Obama-Biden regime have been deploying this independently, even after they’d left office. This is now leading to a nationwide probe into the elections. Think about that. How can you declare a winner under the circumstances, I ask? The media don’t determine who becomes America’s president. The American people do.

Besides, no matter what numbers have been given to you as electoral college score, the Electoral College will still meet on December 14 to vote and allot. How then can you declare a winner?

In Arizona, which the globalist-owned and operated Fox News had called for Biden on November 3, Biden now leads with less than 30,000 votes. Almost less than 1%! Can you imagine?! And they called that state for him!

Today, most in the mainstream media circles have now discounted Arizona’s 11 electoral college votes from Biden’s 264, leaving him with 253, for fear Trump could actually end up winning Arizona. And guess what? Litigation is on in Arizona too. Look up sharpie gate.

Two solid times, Joe Biden had prepared to deliver a Victory Speech and each time, he goes up to the podium and says something else. And you don’t see the handwriting on the wall?

This election has been a gigantic mess and I can’t stop wondering how long it’ll take our world, not just America to recover from this.

If Trump doesn’t fight to #StoptheSteal and #CountEveryLEGALVote and expose these criminals who have brazenly committed felony and jail them all, America will loose its moral grounds to fight corruption till eternity. Thank God he’s ready to fight.

Already, Nigerian and some African politicians who are very good students of corrupt ideals have started taking notes. How can America slam election riggers with visa bans and sanctions if these leftist criminals get away with this? It’s time to fight until victory is won.

And we will fight. We are “Trumpets” and we don’t cave.

Thankfully, we’re not as heartless and toxic as those who prematurely took a victory lap with imbecilic vituperations. We’re different. We’re lovely and godly. We don’t say quit till we see the last drop. We don’t go down without a fight. And just so you know, this battle is not over yet.

And even if, God forbid it doesn’t eventually go our way, we will be very gracious in defeat knowing fully well that we’ve done all we could to sound the alarm and warn our generation.

If you’re a Trump supporter, You should be very proud and happy right now because, it’s not yet over until God says so. Shalom!”

I wholeheartedly concur with this brilliant man. May God’s counsel stand in America and may His will be done throughout the world.