Tensions has heightened in the Nigeria Military following defections of Soldiers to the Eastern Security Network ESN.

One of the military sources noted that more soldiers from the South-East, particularly those in the Operation Lafiya Dole Theatre Command, are currently being wooed to resign and join the Eastern Security Network

Nnamdi Kanu said : SLOWLY it is dawning on them that we are not joking. The #Zoo is in one almighty mess. People of conscience are waking up to the redeeming gospel we have been preaching for years. I commend those that have come over to join us and hope that those left behind will have the courage to join the new upcoming revolution sooner rather than later.

The cowardly terrorists in #NigerianArmy uniform terrorising innocent people of Orlu since early this morning in support of Miyetti Allah Fulani terrorists raping our mothers across Imo are now on the run. We shall find them wherever they are hiding in Imo State. After today they won’t come out of Obinze barracks again. Idiots!
I am holding Hope Uzodinma personally responsible for what happened in orlu earlier today.

Meanwhile It was learnt that some of the soldiers who resigned did so on the grounds that the ESN, being funded by both international and local donors, has better welfare packages for its officers than the military.

“The Kanu ESN boys are not a bunch of rookies and untrained fellows brandishing guns. I personally know five guys from my hometown in Anambra State who left the Nigerian Army to join the ESN. Two of them were formerly serving in Operation Lafiya Dole, Borno State, before they quit.

“We are being reliably informed that there are other soldiers, particularly of the South-East extraction, who will soon leave for other various reasons and they are likely to be recruited into the fold,” one of the sources said.

Kanu, the leader of the proscribed Indigenous People of Biafra, had recently announced the formation of the Eastern Security Network as a regional force to protect the South-East and South South from banditry and attacks from Fulani herdsmen.

In July 2012, about 356 soldiers in the North-East and other theatres of operation had resigned from the army – some on voluntary retirement, while others cited loss of interest as their reason for disengagement.

The soldiers had written to the army chief, Lt Gen Tukur Buratai, on July 3, 2020, under Reference NA/COAS/001, quoting the Harmonised Terms and Conditions of Service soldiers/rating/airmen (Revised) 2017.

The approval of the voluntary disengagement of the 356 soldiers was contained in a 17-page circular from Buratai, AHQ DOAA/G1/300/92, signed by Brig Gen T.E. Gagariga for the army chief.

Again, this January, another batch of 127 soldiers resigned from the Nigerian Army and are due to leave by May.

Two weeks after Kanu launched the ESN on December 12, 2020, the Nigerian Army on December 30 was reported to have deployed combat helicopters, gun trucks and soldiers to search some suspected forests in the South-East states where the ESN, was said to be camping.

AUTHENTIC reported that the military search had been ongoing for days, and had no time frame, as the army was acting on “orders from above.”

A video from the drones and hidden cameras believed to be installed by the ESN, had captured the Nigerian Army helicopters and their vehicles and soldiers searching for the camp of the ESN for possible arrests.

“The Nigerian Army that is supposed to fight Boko Haram was seen everywhere searching for the camp of Eastern Security Network team. But they forgot they are dealing with sophisticated men. There are cameras and drones everywhere watching them,” an official had said.

The police force had also stated last week that its personnel had yet to identify an ESN official or camp in the South-East, while dismissing Kanu’s ESN as propaganda and non-existent.

Fulanis on the run as Sunday Igboho, supporters chase them from Igangan in Oyo [Video]

Sunday Igboho, a Yoruba activist made good on his threat to expel Fulanis from Igangan in Oyo State. Igangan is a community in Ibarapa North Local Government Area. Last Friday, Igboho and his supporters stormed… 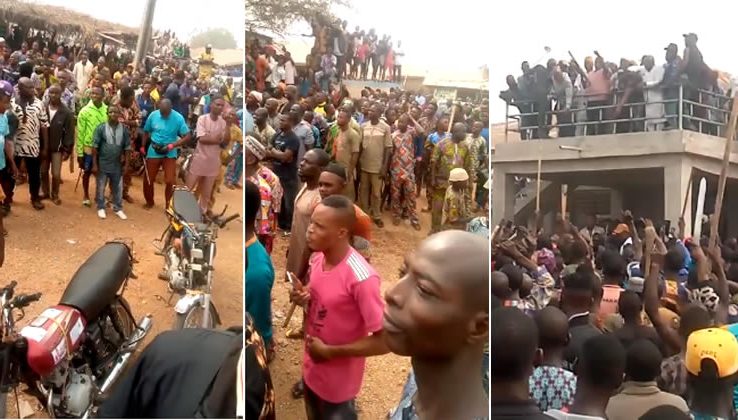