The decision of Punch Newspaper to now address the Nigeria President with his Former title in the 80’s as Major General has sprung up reactions from many quarters.

This is coming after the United State of America New Jersey Senator Warns Nigeria President and it;s security officers  on harassing Journalist who decides to speak the truth and also demanded for the Release of Omoyele Sowore in a 10 Mins Video.- Watch Video Here + See letter

In a notice titled “Buhari’s lawlessness: Our Stand”, Punch stated that it will “henceforth prefix Buhari’s name with his rank as a military dictator in the 80s ‘Major General’ and refer to his administration as a regime until they purge themselves of their insufferable contempt for the rule of law.

The newspaper made the decision while making reference to DSS non-compliance to court orders on trial of Omoyele Sowore, publisher of SaharaReporters; invasion of courtroom and trial of Shiites’ leader, Ibrahim El-Zakzaky amongst others.

Punch said its decision shows its protest against autocracy and military-style repression under Buhari’s administration.

However, in reaction to Punch’s decision, Femi Adesina, a Senior Special Assistant to the President on Media and Publicity, said the newspaper’s decision to call Buhari ‘Major General’ is not out of order.

According to him, Punch’s publication is proof of press freedom under Buhari’s administration.

Adesina wrote: “If you decide to call him Major General, he wasn’t dashed the rank, he earned it. So, you are not completely out of order.

“The fact that you can do so is even another testimony to press freedom in Nigeria.” 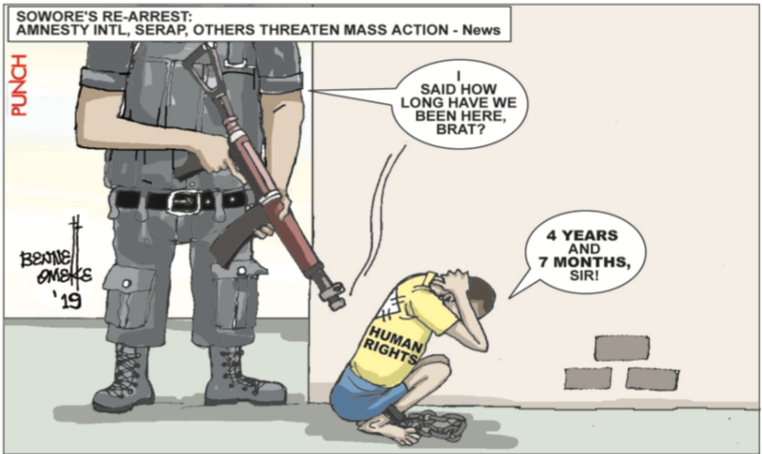 “As a symbolic demonstration of our protest against autocracy and military-style repression, PUNCH (all our print newspapers, The PUNCH, Saturday PUNCH, Sunday PUNCH, PUNCH Sports Extra, and digital platforms, most especially Punchng.com) will henceforth prefix Buhari’s name with his rank as a military dictator in the 80s, Major General, and refer to his administration as a regime, until they purge themselves of their insufferable contempt for the rule of law.”

The entire country and a global audience are rightly scandalised by the unfolding saga over Omoyele Sowore and the unruliness of the SSS and the government; but it is only a pattern, a reflection of the serial disregard of the Buhari regime for human rights and its battering of other arms of government and our democratic institutions. PUNCH views this tendency and its recent escalation with serious concern, knowing as the great thinker, Edmund Burke, said that “the only thing necessary for the triumph of evil is for good men to do nothing.” Nigeria had trod a path, a veritable obstacle course, where repression, especially under military jackboots, was a malignant presence and this attracted heroic resistance by ordinary people, civil society groups and the press. But Nigerians have lately become lethargic, divided by ethnic and sectarian sentiments and weakened by widespread poverty brought on by a rapacious political class and bad governance.

PUNCH will not adopt the self-defeating attitude of many Nigerians looking the other way after each violation of rights and attacks on the citizens, the courts, the press and civic society, including self-determination groups lawfully exercising their inalienable rights to peaceful dissent. This regime’s actions and assaults on the courts, disobedience of court orders and arbitrary detention of citizens reflect its true character of the martial culture. Major General Muhammadu Buhari (retd) ran a ham-fisted military junta in 1984/85 and old habits obviously run deep.  Until he and his repressive regime purge themselves of their martial tendency therefore, PUNCH will not be a party to falsely adorning it with a democratic robe, hence our decision to label it for what it is – an autocratic military-style regime run by Major General Muhammadu Buhari (retd).

Sowore’s travails are symptomatic: having ignored court orders granting him bail, the SSS, after much pressure following 125 days in captivity, released him only to stage a GESTAPO-style raid on the court where the journalist was standing trial. The leader of the Islamic Movement in Nigeria, Ibrahim el-Zakzakky and his wife have spent over three years in detention in violation of court orders granting them bail and ordering their release. A former National Security Adviser, Sambo Dasuki, has been held in detention since 2015 in defiance of several court orders, including one by the ECOWAS appellate court that declared his continued incarceration illegal. Under Buhari, the SSS has become a monstrous and repressive secret police, acting often with impunity. Buhari bears responsibility for the state of repression because, as president, he can stop it today.

But the SSS is not alone. The Nigeria Police, whose notoriety predates Buhari’s second coming, has continued its serial abuse of human rights and is ever available to officials who routinely deploy police officers from the mundane abuse of sirens in traffic to arbitrary arrest and torture of victims. The police and military fail to understand that peaceful agitation and the right to associate are fundamental rights.

This situation is eerily familiar: as military head of state, Buhari’s appointee who headed the National Security Organisation, as the SSS was then known, Lawal Rafindadi, unleashed a reign of terror on Nigerians, featuring arbitrary arrests and torture in cells described by inmates as chambers of horror. Under the infamous Decree 2, agents had pre-signed detention papers, court orders were ignored and ouster clauses were inserted in decrees, while the press was specifically targeted with the infamous Decree 4 under which Tunde Thompson and Nduka Irabor were jailed.

Returning as an elected president, Buhari has followed the same template, appointing Lawal Daura as Director-General of the SSS, who re-enacted the Rafindadi playbook by his treatment of Dasuki and el-Zakzakky, among others, raided the homes of judges and twice deployed armed SSS heavies to foil the arrest of two former security chiefs by the Economic and Financial Crimes Commission. Nigerian Navy authorities similarly ignored court orders to release Navy Captain Dada Labinjo, who they detained for over a year until his recent release on bail; Nigerian Army too detains suspects interminably on the grounds of being terrorism suspects.

Some governors have borrowed from this nefarious model, deploying security agents and perverting the law to punish critics and journalists. Critics, Dadiyata Idris and Stephen Kefas, have been arrested and arraigned. Agba Jalingo is facing a treason charge for offending the Cross River State Government. Jones Abiri, a local publisher in Bayelsa State, has been charged with terrorism while, in Delta State, two journalists are facing criminal defamation charges.

The regime’s Information and Culture Minister, Lai Mohammed, forgetting how, as opposition spokesman in 2014, he was harassed by the SSS and accused of “loitering,” has been vigorously pressing for anti-hate speech laws to restrict the social media. Abdullahi Sabi, a senator, along with others, has re-presented a hate-speech bill: their sole purpose is to insulate officials from criticism and compel unquestioned acceptance of Buhari’s draconian misrule.

Under the law, suspects cannot be held beyond 48 hours except by a court order. But the regime observes this in the breach. Yet, Nigeria is a signatory to the United Nations Declaration of Human Rights, African Charter on Human and People’s Rights and the Convention Against Torture and Other Cruel, Inhuman or Degrading Treatment and other treaties guaranteeing fundamental rights. The 1999 Constitution also spells out basic rights. But the regime chooses which rights or court orders to respect or obey. This is unacceptable. Critical segments of the society have been assaulted, silenced or compromised. It is time, as a Nobel laureate, Wole Soyinka, has strongly advocated, for civil society to rejuvenate itself and send the message to Buhari to “rein in his wild dogs of disobedience.” From the United States has come a message from the Department of State, two senators and Congress telling the Buhari regime to stop its shocking affront to the rule of law, reminding the General that “respect for the rule of law, judicial independence, political and media freedom, and due process are key tenets of democracy.”

Nigeria has had more than its fair share of draconian rulers, whether in military or civil garb, but none has succeeded in breaking our resilience and irrepressible spirit. This regime will not prove to be an exception. Nigeria, and Nigerians, will overcome. The strong desire of our people to enjoy the unfettered freedoms guaranteed by the constitution and the rule of law, including the freedom to speak freely and assemble peacefully, will again outlive, outlast and crush the spirit of despotism.

Buhari can still redeem himself and his out-of-control security agents and reclaim his past facade of tolerance. When Daura brazenly inserted himself in politics by recklessly sending armed masked SSS enforcers to besiege the National Assembly, as acting President, Vice-President Yemi Osinbajo promptly sacked him and had him arrested. Buhari should similarly distance himself and his regime from the lawlessness and impunity of the current SSS DG, Yusuf Bichi, by dismissing him, ordering the release of all victims of illegal detention and compelling obedience to court orders. The SSS has not been efficient in the war against terror; it should perform its primary duty to safeguard the country. As a product of statute, its loyalty should be to the country, not to temporary occupiers of public office.

The regime’s repression cannot succeed but will further polarise the society and weaken national cohesion.  The Nigerian Bar Association has vowed to defend the sanctity of judicial authority, while Soyinka has warned that disregard for court orders could beget desperation and civil disobedience. Nigerians need to stop their supine acquiescence to oppression and learn to stand up for their rights as many are doing around the world, using all peaceful and legal means, including the right to protest and of peaceful assembly. It is Dasuki, el-Zakzakky, Sowore and others today, who knows who is next if repression is not resisted?

As a symbolic demonstration of our protest against autocracy and military-style repression, PUNCH (all our print newspapers, The PUNCH, Saturday PUNCH, Sunday PUNCH, PUNCH Sports Extra, and digital platforms, most especially Punchng.com) will henceforth prefix Buhari’s name with his rank as a military dictator in the 80s, Major General, and refer to his administration as a regime, until they purge themselves of their insufferable contempt for the rule of law.

United State of America Senator of New Jersey, Senator Bob Menendez has vehemently called on the Nigeria Authorities to immediately release Nigerian-American journalist and activist and a New Jersey resident Omoyele Sowore. In a video…