Prayer can be defined as a cry or supplication unto the Lord “If Thou afflict them in any wise, and they cry at all unto me, I will kill you with the sword; and your wives shall be widows and your children Fatherless” ( Exodus 22:23-24) “ The Righteous cry, and the Lord heareth and delivereth them out of all their troubles. ( Psalm 34:17) “ And The lord said, Hear what the unjust Judge saith …. And shall not God Avenge his own elect, which cry day and night unto him, though he bear long with them? I tell you that he will avenge them speedily” (Luke18:6-8).

Prayer also means fighting a spiritual battle “For we wrestle not against flesh and blood but against Principalities, against powers, against spiritual wickedness in high places” (Ephesians 6:12), “ For the weapon of our warfare are not carnal, but mighty through the pulling down of strong holds ( 2 Corinthians 10:4).

Furthermore, Prayer equally means, pouring your heart unto God “And Hannah answered and said No, my Lord I am a woman of a sorrowful spirit; I have drunk neither wine nor Strong drink, but have poured out my soul before the Lord” (1 Samuel 1:15). The Last but not the least, Prayer means seeking the face of the Lord “ Seek the Lord and his strength; Seek his face evermore” ( Psalm 103:4).

” For Everyone that asketh recieveth and he that seeketh findeth, and to him that knocketh it shall be opened” ( Luke 11:10).

Prayer is very important weapon in spiritual warfare; It serves as defensive and Offensive mechanism.

Defensive; when a real child of God prays with God’s promises the prayer keeps him shielded against the wiles of the devil. Such prayer strengthens his faith and removes fear and unbelief and also makes him as bold as a lion.

“And now Lord behold their threatening; and grant unto your servant, that with all boldness they may speak thy word, by stretching forth thine hand to heal; and that signs and wonders may be done by the name of thy Holy Child Jesus, And When they had prayed, the place was shaken where they were assembled together; and they were all filled with the Holy Ghost and they spake the word of God with boldness” (Acts 4:29-31)

Prayer is an Offensive mechanism, is such when used in spiritual warfare gets the kingdom of Satan in disarray. Here, It is used as a spiritual missile. A spiritual Missile is a weapon that is self propelled or directed by remote control carrying conventional or nuclear explosives to the Kingdom of Satan.

When the saints engage in Spiritual Warfare, The Words that come out of their mouth become destructive to whatsoever is being directed at. In This battle against marine kingdom, God will direct all your prayers to the powers after your life and your will not miss the target in Jesus Christ Mighty Name.

” For the weapon of our warfare are not carnal but mighty through God to the pulling down of strongholds casting down imaginations and everything that exalteth itself against the knowledge of God and bringing into captivity every thought to the obedience of Christ” (2 Corinthians 10:4)

” Finally my brethren be string in the Lord and in the Lord and in the power of his might, Put on the whole amour of God, That ye may be able to stand against the wiles of the devil, For we wrestle not against blood, But against principalities against power, against rulers of the darkness of this world, Against spiritual wickedness in high place. (Ephesians 6:10-12).

Beloved of God, Get ready, remove doubt in your heart and fight a good fight of faith, all the marine powers in your communities must surrender and handover to you all that belongs to you they have been holding in Jesus Name.

Saints of Old used this weapon and it worked for them, beloved it will work for you. Daniel used the power and the weapon of prayer to seal up the mouth of the lions in a strange land that would have eaten him up.

“Then the king commanded, and they brought Daniel, and cast him into the den of lions. Now the king spake and said unto Daniel, Thy God whom thou servest continually, he will deliver thee. And a stone was brought, and laid upon the mouth of the den; and the king sealed it with his own signet, and with the signet of his lords; that the purpose might not be changed concerning Daniel.

Then the king went to his palace, and passed the night fasting: neither were instruments of musick brought before him: and his sleep went from him. Then the king arose very early in the morning, and went in haste unto the den of lions. And when he came to the den, he cried with a lamentable voice unto Daniel: and the king spake and said to Daniel, O Daniel, servant of the living God, is thy God, whom thou servest continually, able to deliver thee from the lions? Then said Daniel unto the king, O king, live for ever.

My God hath sent his angel, and hath shut the lions’ mouths, that they have not hurt me: forasmuch as before him innocency was found in me; and also before thee, O king, have I done no hurt. Then was the king exceedingly glad for him, and commanded that they should take Daniel up out of the den.

So Daniel was taken up out of the den, and no manner of hurt was found upon him, because he believed in his God. And the king commanded, and they brought those men which had accused Daniel, and they cast them into the den of lions, them, their children, and their wives; and the lions had the mastery of them, and brake all their bones in pieces or ever they came at the bottom of the den.” (Daniel 6:16-24).

The Lord that delivered Daniel will deliver you in Jesus Christ Name. For Through prayer and Holiness the three Hebrew children prevailed over King Nebuchadnezzar and his Fire. In the midst of fire, Instead of being consumed, they were dancing. Oh child of God, you must win in this battle using these One thousand prayers Missile against Marine Kingdom in Jesus Christ Name.

” Now if ye be ready that at what time ye hear the sound of the cornet, flute, harp, sackbut, psaltery, and dulcimer, and all kinds of musick, ye fall down and worship the image which I have made; well: but if ye worship not, ye shall be cast the same hour into the midst of a burning fiery furnace; and who is that God that shall deliver you out of my hands? Shadrach, Meshach, and Abednego, answered and said to the king, O Nebuchadnezzar, we are not careful to answer thee in this matter.

If it be so, our God whom we serve is able to deliver us from the burning fiery furnace, and he will deliver us out of thine hand, O king. But if not, be it known unto thee, O king, that we will not serve thy gods, nor worship the golden image which thou hast set up. Then was Nebuchadnezzar full of fury, and the form of his visage was changed against Shadrach, Meshach, and Abednego: therefore he spake, and commanded that they should heat the furnace one seven times more than it was wont to be heated. And he commanded the most mighty men that were in his army to bind Shadrach, Meshach, and Abednego, and to cast them into the burning fiery furnace.

Then Nebuchadnezzar the king was astonished, and rose up in haste, and spake, and said unto his counsellors, Did not we cast three men bound into the midst of the fire? They answered and said unto the king, True, O king. He answered and said, Lo, I see four men loose, walking in the midst of the fire, and they have no hurt; and the form of the fourth is like the Son of God. Then Nebuchadnezzar came near to the mouth of the burning fiery furnace, and spake, and said, Shadrach, Meshach, and Abednego, ye servants of the most high God, come forth, and come hither.

Then Shadrach, Meshach, and Abednego, came forth of the midst of the fire. And the princes, governors, and captains, and the king’s counsellors, being gathered together, saw these men, upon whose bodies the fire had no power, nor was an hair of their head singed, neither were their coats changed, nor the smell of fire had passed on them. Then Nebuchadnezzar spake, and said, Blessed be the God of Shadrach, Meshach, and Abednego, who hath sent his angel, and delivered his servants that trusted in him, and have changed the king’s word, and yielded their bodies, that they might not serve nor worship any god, except their own God.

Therefore I make a decree, That every people, nation, and language, which speak any thing amiss against the God of Shadrach, Meshach, and Abednego, shall be cut in pieces, and their houses shall be made a dunghill: because there is no other God that can deliver after this sort. Then the king promoted Shadrach, Meshach, and Abednego, in the province of Babylon”. ( Daniel 3:15-30).

The immediate-past Chief Judge of the Federal High Court Nigeria, Adamu Abdu-Kafarati, is dead. Mr Abdu-Kafarati, who retired about 19 months ago, died at 66 and to be buried according to Islamic rites. This is… 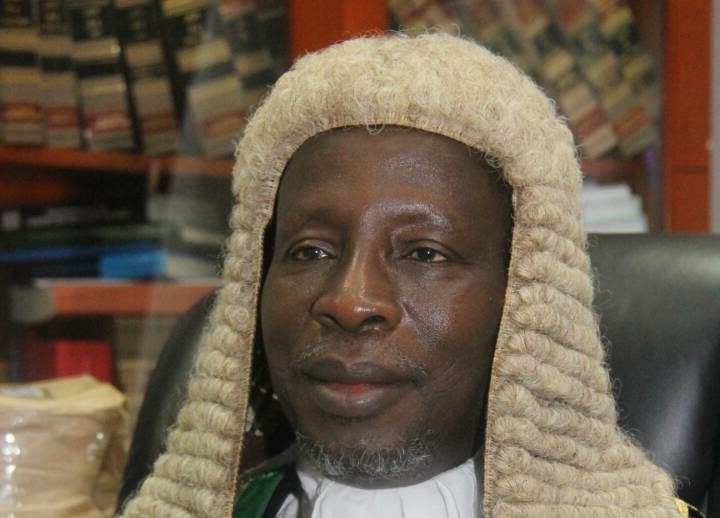