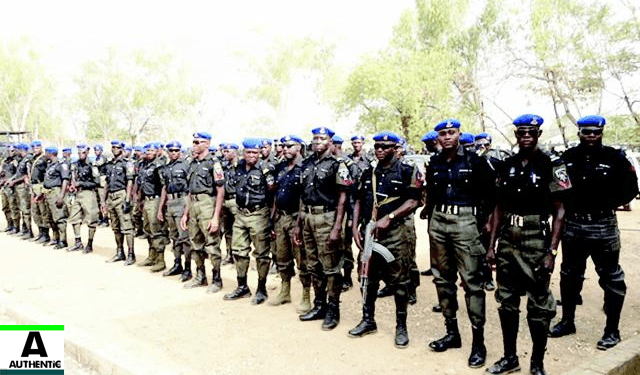 The Nigeria Police have deployed more officers and men to the national headquarters of All Progressives Congress (APC) in Abuja this is over the Suspension of APC National Chairman.

Although, the building is usually under police protection, more personnel have been sent there.

This might not be unconnected to the court order which suspended National Chairman, Adams Oshiomhole.

Justice Danlami Senchi of FCT HIgh Court, earlier in the day, told Oshimhole to stop parading himself as the party’s leader.

He ruled in the application filed by Mustapha Salihu and five others through their counsel, Oluwole Afolabi.

The plaintiffs contended that Oshiomhole is currently suspended and was yet to challenge his suspension as a member of the APC by Etsako ward 10 in Edo State.

The judge asked the APC to desist from acknowledging the former Edo governor.

He also warned the ruling party not to grant Oshiomole access to the national secretariat.

FCT High Court in Maitama, Abuja has ordered the suspension of Adams Oshiomhole as the national chairman of the All Progressives Congress (APC). Justice Danlami Senchi ordered that Oshiomhole to step down as APC Chairman…