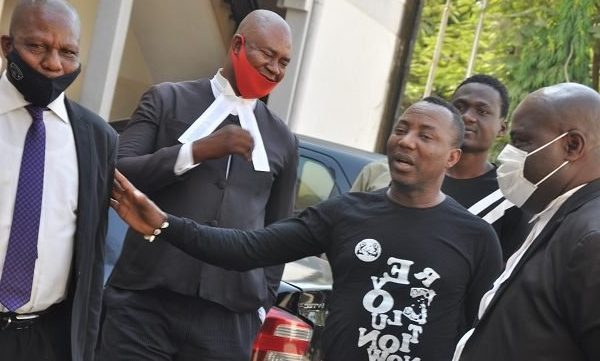 Omoyele Sowore, owner of Sahara Reporters with  four others  has been thrown into Kuje Prison (Kuje correctional facility) pending the consideration of their bail applications.

Sowore and others were arrested by the Special Weapons Tactical Team of the NPF in Abuja over their alleged participation in a protest march a day before the New Year celebration.
They are charged with criminal conspiracy, unlawful assembly and public disturbance.

The prosecution claimed that the defendants were arrested on New Year eve with placards calling for a violent revolution against President Muhammadu Buhari.

The defendants pleaded not guilty to the charge.

At the conclusion of the defendant’s arraignment, the Magistrate ordered that they be remanded in Kuje Correctional facility and adjourned to January 5, 2021 for hearing of their bail applications.

Sowore and another of his associates, Olawale Bakare are currently standing trial before a Federal High Court in Abuja, in which they are charge with treasonable felony after he organised the #RevolutionNow protest in 2019.

They were alleged to have conspired to stage a revolution campaign on August 5, 2019, tagged “#Revolution Now”, aimed at removing President Buhari from office as the Commander-in-Chief of the Armed Forces of the Federal Republic of Nigeria during his term of office, otherwise than by constitutional means.

Racksterli: The New Online Scam trend: On the 25th of August 2020, 15:38:51 the first launch of Racksterli was released with 2114 members. Before I continue on this Review let me introduce myself, I am…