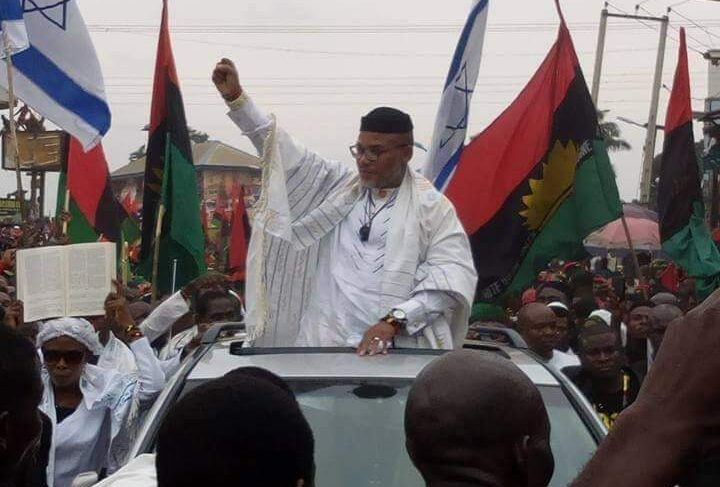 Nnamdi Kanu, Leader of Indigenous People of Biafra IPOB and Radio Biafra Director has vowed that if the Nigeria army invade ” Biafra land” he will go in the forest and will not come out until Nigeria is destroyed.

Biafra land comprises of the South  East and South South of the Nigeria states.

Nnamdi Kanu said” We are warning Nigeria that if their army comes into our land, we will go into the bushes and we will not come out till Nigeria is utterly destroyed.”

“If you bring your army to the South, your army will die, and it will be a Declaration of war, it will be Fulani against the rest of the indigenous people all over the world.”

The Biafra Leader also said that if the Nigeria Army shoot at innocent ENDSARS protesters that will bring about a war that will end Nigeria.

Meanwhile the Nigerian Army on Sunday assured that its Operation Crocodile Smile drill was not targeting anti-SARS protesters.

Spokesman of the Nigerian Army, Musa Sagir, said contrary to insinuations, the operation was not aimed at stifling the ongoing nationwide protest.

Sagir disclosed this in a statement he issued, on Sunday.

He noted that the Army has been professional since the protest started “nearly two weeks ago”.

The statement reads: “The attention of the Nigerian Army (NA) has been drawn to some social media stuff wrongfully condemning the Army and its Leadership over the announcement of Exercise CROCODILE SMILE VI particularly the Cyber Warfare Component of the Exercise. This year’s Exercise CROCODILE SMILE is scheduled to commence from the 20th of October to the 31st of December 2020 has no relationship with any lawful protest under any guise whatsoever,” the statement read.

“For the records, Exercise CROCODILE SMILE is a yearly exercise in the NA Calendar/Forecast of Events which traditionally holds from October to December of each year.

“Thus, to now insinuate that it is an exercise meant to stifle the ongoing ENDSARS protest is to say the least highly misinformed. Exercise CROCODILE SMILE VI has nothing to do with the ongoing protest and the NA has never been involved in the ongoing protest in any form whatsoever. So far, the army has acted professionally since the civil protest started over two weeks ago.

“The army hereby enjoins all law abiding Nigerians to go about their lawful activities unhindered as the Exercise has nothing to do with ENDSARS protest, but a yearly event set out to train NA officers and soldiers in its efforts to ensuring safety and security of Nigeria and her citizens.”

Reports broke the internet that systems belonging to Multichoice PayTV platforms, DStv and GOtv, were hacked on Sunday. Many on Twitter claimed that some hackers who simply identified themselves as ‘Anonymous’ were behind it. ‘Anonymous’…