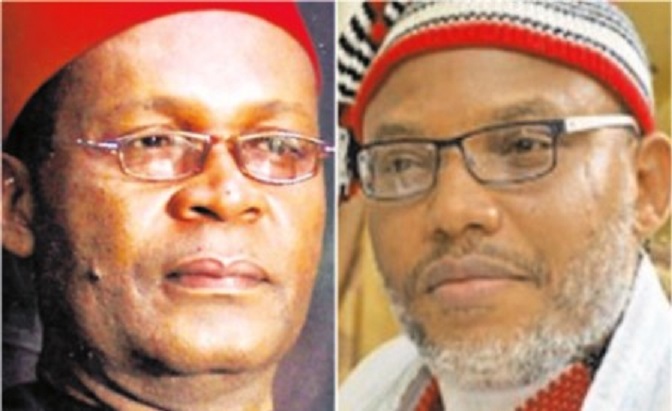 Chieftain of the All Progressive Congress, (APC), Joe Igbokwe has berated the leader of the Indigenous People of Biafra, IPOB, Nnamdi Kanu.

He posited that the continued utterances of the pro-biafra agitator was endangering the lives of the Igbo in Nigeria.

Igbokwe urged well meaning Igbo leaders to rise up now and call the IPOB leader to order as his activities is capable of bringing up another genocide and millions of Igbos will die.

AUTHENTIC Reports that Nnamdi Kanu, leader of the Indigenous People of Biafra, IPOB, had attacked Bola Tinubu, leader of the All Progressives Congress, APC, accusing him of being behind the killing of End SARS protesters.

The APC National Leader had in a recent statement denied sponsoring the ongoing nationwide protests by young people in Nigeria.

In a Facebook post, Kanu lambasted the APC leader for saying that Nigerian youths can no longer be deceived.

But, reacting in a statement,  Joe Igbokwe former Publicity Secretary of APC in Lagos State, said the Igbo in Lagos do not possess the character and courage to invade Oba Akiolu’s palace, opining that the invasion had political undertone.

His words, “Nnamdi Kanu does not speak for the Igbo Nation and therefore his opinion is not the opinion of intelligentsia and business moguls in Igbo land.

“Those who matter in Igbo land are not on the same page with the Kanu of IPOB.

“My people will say in an adage that: It is rat inside the house that will tell the rat outside the house that there is something in the house. We have to look inside. I have been in Lagos enough and deeply too close to Ashiwaju to know all his enemies in Lagos and Yoruba nation and it is political.

“Please help to find the progenitors and the leaders of End SARS Movement even though they will tell you they have no leaders. I am sure the leaders are not Igbo and I know it. End SARS may be a dummy sold to the public but i have a feeling that it has deep political undertones.

“Let me use this medium to draw the attention of of South East Governors, Senators, House of Reps MeMbers, State Law makers in the South East, Igbo intelligentsia, Igbo leaders of thought, Traditional Rulers, Captains of Industries from Igbo land, Igbo business moguls, Igbo Professors and intellectuals, all Egg Heads in the South East, Igbo intellectuals in diaspora, Igbo professionals, etc, to rise up now and speak out.

“The kind of statement he issued which I listened to is capable of bringing up another genocide and millions of Igbo will die. Let us gather to reason together and run when the rain is yet to come. Nnamdi Kanu is putting all Igbo in trouble and danger in Nigeria. This is the time to call a spade a spade and tell Nnamdi Kalu that a tree cannot make a forest”.

‘You are a dictator, sociopathic disgrace’ – Fani-Kayode attacks Buhari

Femi Fani-Kayode, former Aviation Minister, on Friday, condemned President Muhammadu Buhari’s nationwide address to End SARS protesters. Fani-Kayode said Buhari’s speech exposed him as a disgrace to humanity and a dictator. He pointed out that…