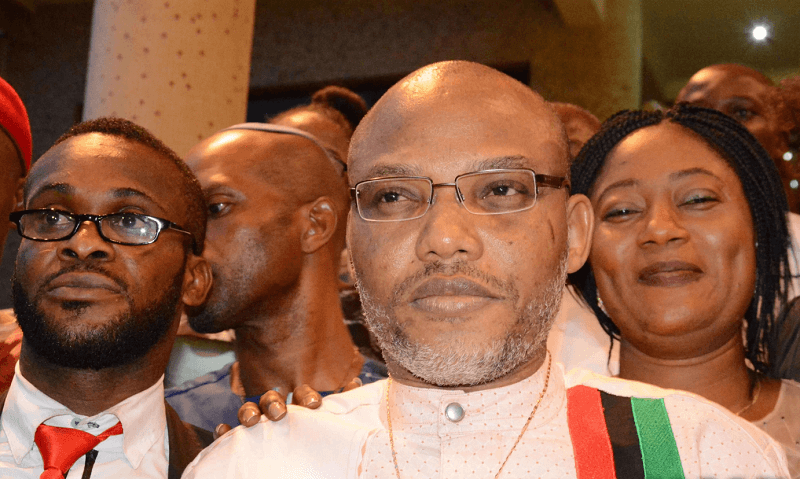 Nnamdi Kanu, leader of the Indigenous People of Biafra, IPOB, on Tuesday, disclosed that his group was in possession of the original Aburi Accord tapes.

Aburi Accord was reached in 1967 at a meeting attended by delegates of both the Federal Government of Nigeria (the Supreme Military Council) and the Eastern delegates, led by the Eastern Region’s leader Colonel Ojukwu. The meeting was billed to be the last chance of preventing all out war. It was held between 4 and 5 January 1967.

Kanu made the disclosure while noting that former Nigeria Military Head of State, Yakubu Gowon and Britain are in trouble.

He vowed to expose the alleged lies told against former warlord, the late Chukwuemeka Ojukwu regarding the defunct Biafra.

In a statement he issued, the IPOB leader said Gowon, Nigerian and British government’s are about to receive the biggest shock ever.

According to Kanu: “The divinely-ordained noble family of the Indigenous People of Biafra (IPOB) is now in possession of the original Aburi Accord tapes.

“Yakubu Gowon, Fulani Oligarchy and the British Government are all in trouble. Our eternal leader Dim Chukwuemeka Odimegwu Ojukwu and Biafra is about to be vindicated before the world.

NEWS: Alleged military brutality: NMA threatens work boycott in Osun
“All the lies concocted against Ojukwu and Biafra by the BBC and world media is about to be blown out of the water.

“A very massive earthquake is coming. Britain, Gowon, Nigeria and the media is about to receive the greatest shock of their lives. Nigeria is finished!”

kanu has been in the forefront for the secession of Nigeria.

Despite being arrested and prosecuted, the IPOB leader was able to elope to the United Kingdom, UK, where he has been pushing for the actualisation of Biafra.

FULL TEXT OF THE ABURI ACCORD

(ii) The Army should be reorganized in order to restore discipline and confidence, Specifically,

a. the army should be governed by the Supreme Military Council which would be chaired by a Commander-in-Chief of the Armed Forces and the Head of the Federal Military Government;

b. Area Commands under Area Commanders and corresponding to existing Regions should be created.

c. During the period of the military goverment, Military Governors should have control over Area Commands, for internal security.

d. A military headquarters, comprising equal representation from the regions and headed by a Chief of Staff, should be established.

e. A Lagos Garrison, including Ikeja Barracks, should be created.

(iii) In accordance with the decision of August 9, 1966, Army personnel of Northern Nigerian origin should return to the North from the West. In order to meet the security needs of the West, a crash programme of recruitment and training is necessary but the details should be examined after the Military Committee has finished their work.

(iv) The Supreme Military Council should deal with all matters of policy including promotion to top executive posts in the Armed Forces and the Police.

(v) The legislative and executive authority of the federal Military Government should be referred for determination, provided that, where a meeting was not possible, such a matter must be referred to the Military Governors for their comments and concurrence.

(vii) With a view to promoting mutual confidence, all decrees or provisions of decrees passed since January 15, 1966, which detracted from the previous powers and positions of the Regional Governments should be repealed. Law officers of the Federation should meet in Benin on January 14, 1967, and list all the decrees or provisions of Decrees concerned, so that they may be repealed not later than January 21, 1967, if possible.

(viii) A meeting of Permanent Secretaries of the Ministries of Finance of all the governments in the federation should be convened within two weeks to consider ways and means of resolving the serious problems posed  by displaced persons all over the country.

(ix) Displaced civil servants and corporation staff (including daily-paid employees) should continue to be paid their full salaries until March 31, 1967, provided they have not secured alternative employment. The Military Governors of the East, West and Mid-West should send representatives (Police Commissioners) to meet and discuss the problems of recovery of property left behind by displaced persons.

(x) The Ad Hoc Constitutional Committee should resume sitting as soon as practicable, and the question of accepting the unanimous recommendations of September 1966 should be considered at a later meeting of the Supreme military Council.

(xi) For at least the next six months there should be purely a Military Government having nothing to do with politicians.

(xii) The deceased military leaders should be accorded full military honors due them.

(xiii) All government information media should be restrained from making inflammatory statements and causing embarrassment to various Governments in the Federation.

(xiv) Lt.-Col Ojukwu should keep his order – that non-Easterners should leave the Eastern Region – under constant review with a view to its being lifted as soon as practicable.

(xv) The next meeting of the Supreme Military Council should be within Nigeria at a venue to be mutually agreed.

Nigeria President Muhammadu Buhari has re-appointed the Chairman of the Independent National Electoral Commission (INEC), Professor Mahmood Yakubu, for a second term in office. Buhari made this known in a letter sent to President of…