Femi Adesina, the Special Adviser to President Muhammadu Buhari has hit out at former president, Olusegun Obasanjo, asking him to mind his utterances as he also contributed to the current chaos in the country.

The presidential spokesman stated this in a piece on Friday titled, ‘Nigeria’s Unity and All The Iberiberism’.

“And what of Olusegun Obasanjo, a civil war hero. Despite all that he has contributed to the current upheavals by his actions and inactions, words and bile, he says it is idiotic to wish Nigeria disintegration now. Good.

“But let us put our money where our mouth is. Let Baba mind his thoughts, and his language,” Adesina wrote.

He added: “Nigeria will survive. The polity will endure. And the component parts will live together in amity and brotherhood. Any other option is Iberiberism.”

Obasanjo was a military head of state from February 1976 to September 1979, before becoming a democratically elected president between May 1999 and May 2007.

He recently wrote an open letter to Buhari, listing four avoidable calamities that can befall Nigeria.

Ohanaeze Ndigbo, the apex Igbo socio-cultural organization, has slammed the Northern groups for placing a bounty on Nnamdi Kanu’s whereabouts. ANG  had reported that 17 Northern groups under the aegis of Northern Consensus Movement (NCM)… 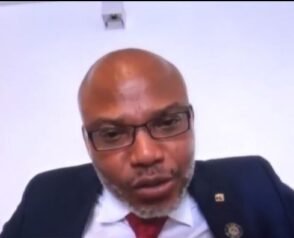