Back to all posts
Home
/
All You Need to Know
/
General Ibrahim Attahiru: Life and times of Nigeria’s late Army Chief

Attahiru, a Hausa, was born on August 10, 1966. Intriguingly, he hailed from Doka in Kaduna, the State he passed away.

Attahiru was among the Service Chiefs appointed by President Muhammadu Buhari in January 2021.

In four months, the Nigerian Army under Attahiru recorded considerable success. Though troops were lost, several terrorists were eliminated.

The military launched a series of assault in the Sambisa general area and sects’ hideouts. Attahiru regularly visited Borno, the epicenter of the insurgency in Nigeria.

Under him, Operation Tura Takai Bango, the military’s first major operation this year to degrade threats in the North-East emerged. It was victorious.

On various occasions, he hailed the synergy between the air and ground forces, and credited successes to the partnership.

Army spokesman, Brig. Gen. Mohammed Yerima explained that the decision was taken based on the need to re-align for better efficiency.

“The renaming is in line with the COAS vision of having an Army repositioned to professionally defeat all adversaries”, Yerima noted.

He quoted Attahiru as saying the complete defeat of insurgency is a process that requires the stakeholders’ participation, using all elements of national power.

Before their appointments, Irabor and Attahiru were Commander and Deputy Commander at the Training and Doctrine Command (TRADOC) of the Nigerian Army, in Minna, Niger State.

Established in 1981, TRADOC is a research-oriented formation. The Command is charged with doctrinal training and combat development.

It supervises and coordinates research and development of all training schools, depots and the command college of the Nigerian Army.

TRADOC serves as a major senior think-tank and a liaison centre between the Army and educational establishments to ensure professional development of officers.

It also serves as headquarters for directing the operational tasks of various divisions of the Army that are on deployment.

Annually, TRADOC conducts and supervises the Senior Staff Course Qualifying Examination (SSCQE) for officers in the ranks of Major and Captain across all units.

Attahiru served as Theatre Commanders of Operation Lafiya Dole, the central outfit of the Army in North-Eastern Nigeria.

Irabor handed over the leadership of the unit to Attahiru on May 30, 2017.

Attahiru obtained a Graduate Diploma from the University of Nairobi, Kenya and holds Master’s degrees from the Nigerian Defence Academy and Salford University in the United Kingdom.

As Theatre Commander in Borno, Attahiru created dugouts along the crossing points of terrorists, to deny them freedom of action and stem the conduct of their nefarious activities, before launching Mobile Strike Teams (MSTs).

The teams reinforced the Mobile Brigade Concept (MBC) adopted in the Theatre to facilitate the quick defeat of enemies of the state.

The US Mission in Nigeria issued a statement on Friday night.

America joined Nigerians in mourning the loss of life from the plane crash in Kaduna.

The world power called the demise of Attahiru and others as “a tremendous loss to Nigeria, and his loved ones”.

“During this difficult time across Nigeria when security and peace is so needed, we offer our deepest sympathy to the family of General Attahiru and to the families of all those who perished,” it read.

Nigerians are in shock over the news with different claims and theories. While some say the aircraft might have developed a fault, others alleged assassination.

One of Attahiru’s last public engagements was his appearance at the House of Representatives in April.

Attahiru said his predecessors are in a better position to speak on arms funds approved by the federal government.

The Adhoc Committee on Arms and Ammunition Purchase, had asked him to explain the summary on contracts executed by the Nigerian Army.

Chaired by Hon. Olaide Akinremi, the committee is reviewing the purchase and use of arms, ammunition, and related hardware by the military, paramilitary, and other agencies.

The departed COAS told them he could not provide explanation because he did not authorize any contract.

“The period for which you wanted this report, having been summarized in the Executive Summary, explains whatever details you will require,” he said.

Noting that procurement “were done by specific individuals,” Attahiru advised the Green Chamber of the National Assembly to invite them to give adequate answers.

President Muhammadu Buhari has expressed sadness over the air crash that claimed the Chief of Army Staff, Lt. Gen. Ibrahim Attahiru, and other military officers.

Recall that Gen. Ibrahim Attahiru, and other military officers died in a crash close to Kaduna International Airport.

Reacting, Buhari in a statement by his Spokesman, Femi Adesina, on Friday, condoled with families of the deceased, the military and Nigerians in general.

He described them as “heroes who paid the ultimate price for peace and security in the land.”

While praying that God receives the souls of the patriots, Buhari said the crash “is one mortal blow to our underbelly, at a time our armed forces are poised to end the security challenges facing the country.”

He, therefore, pledged that the departed would not die in vain. 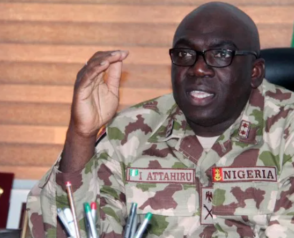