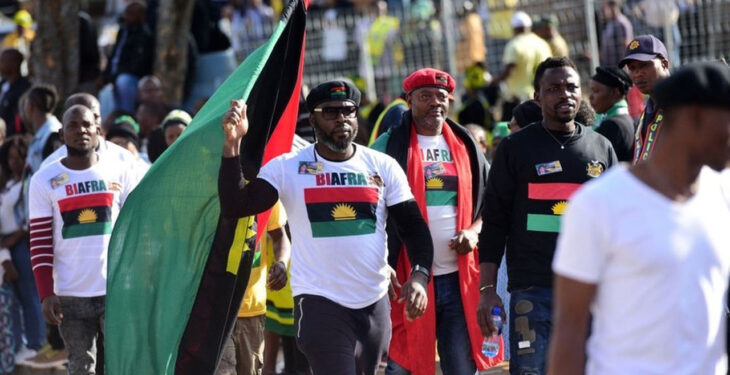 There has been outrage amongst Igbos following the recent pronouncement by the southeastern Governors who met in Enugu State on Saturday.

ANG has reported that the five governors in the region, on Wednesday disowned the secessionist group, Indigenous People of Biafra (IPOB), stating that the group does not speak for the Igbos.

Chairman of the Southeast Governors Forum, David Umahi, who stated this while addressing newsmen shortly after the meeting, said they believe in one Nigeria.

The meeting was targeted at proffering solutions for the current insecurity ravaging the region particularly Imo, Abia, Anambra and Ebonyi State.

“We condemn in totality, the activities of violent secessionist groups in the South East and elsewhere.

“We firmly proclaim that we do not support them, they do not speak for the South East.

“The impression that South-East leaders are silent over some of our youths’ agitations for secession is not correct.

“South-East Governors, Ohanaeze President, National Assembly members, notable leaders had come out publicly many times in the past to speak against such agitations.

“In order not to mismanage the unfortunate situation, South-East leaders have set up a committee to engage such youths to stop and allow elders to speak to address such fears,” he said.

Reacting, some indigenes of the region took to their social media handles to lambast the governors for taking decisions that do not represent the common voice of their electorates.

Omesi Bonn Pillar said, “Southeast governors forum cannot speak for the youths and of course we have decided to exit Nigeria whether or not the governors want it.

“The said governors have mortgaged our future for so long until the advent of IPOB which has come to rescue and set us free by process of giving us Biafra—and that we have aligned with. We are asking for a referendum in order to settle everything”.

According to Ifeanyi Ejimkonye, “It’s quite unfortunate, disheartening and irritating that south east governors can officially disown IPOB and support one Nigeria with the high level of marginalization just because of their selfish interest. I am so ashamed of so-called Southeast Governors.”

“You people should continue showcasing stupidity, greediness and insensitivity. It’s now obvious that you people are not speaking for Igbos. Chukwu Okike Abiama will punish you people one after the other.”

The situation is not different from Twitter as many who, despite the ban on the microblogging platform, expressed their opinions using the medium.

Here are some of the reactions:

@Suitzio: “Instead of them after a long deliberation, we’ll be engaging our people in the coming weeks to know exactly what they want, as it appears Nigeria is drifting off course. For now we urge our people home and abroad to be calm and work for the peace and progress of SE”.

@Stevedameze: “Who are these “Southeast Governors?” Do we really recognize them? I am not sure if they know that they don’t speak for the Igbos. They’ve lost any credibility & a vote of no-confidence has been passed on them. The so-called governors don’t even have a word of their own”.

@Nj99625368: “An adult do not need the consent of his parent to become a Gay/Lesbian. The so-called Leaders must understand that their consent is never needed for us to have a different political opinion. It’s called “Right to choose just as they have chosen which party to belong”.

@KennyAry1: “When was the last time any of our politicians listened to the yearning of the people and acted on their behalf? The last time I checked these men have been representing themselves and not their people. What do y’all expect when elections in black nations aren’t ‘election’ but ‘selection’.

@CharleslyObim0: “This is meaningless. Have they ever supported #IPOB #MaziNnamdiKanu. Leaders that tried to kill their own son by inviting the enemies to kill him and many others in his fathers compound in the name of python dance.”

The Joint Admissions and Matriculation Board (JAMB) has delisted 25 Computer Based Testing (CBT) Centres that failed to conduct examinations on Saturday – the first day of the 2021 Unified Tertiary Matriculation Examination (UTME). Six…