Back to all posts
Home
/
News
/
Eze Knocks Wike’s Proposed N9bn ‘Schools-In-Zones’ As a Blind, Childish & Waste of Resources 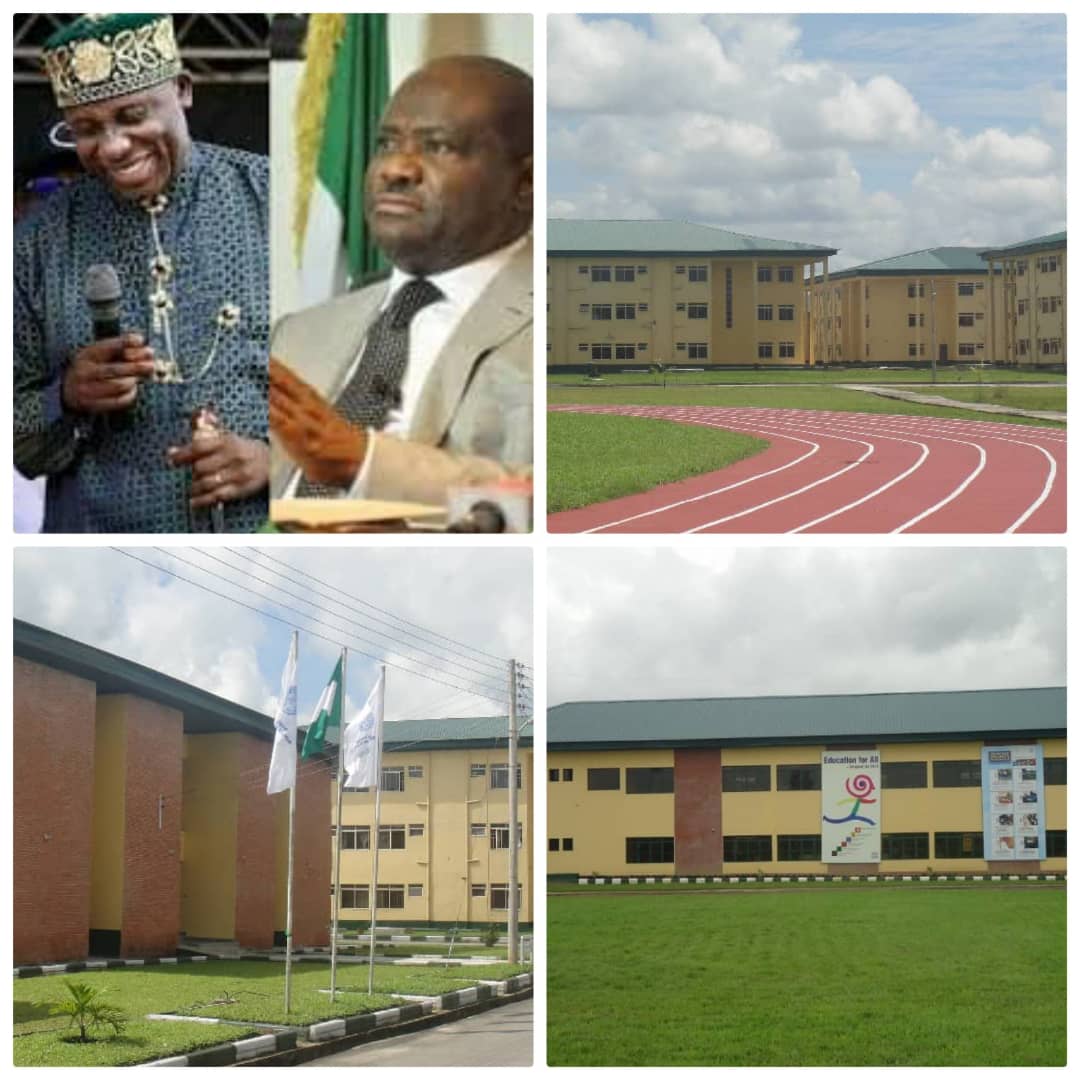 The party chief said men of conscience are yet to recover from the shock of the news, describing it as another tragic magic in his usual confused and deranged style of project execution in Rivers State.

In a statement made available to media houses, the party Chief said albeit a decentralized university system is good especially, to afford people in the hinterlands access to tertiary education without the hurdle of embarking on the distant journey to the city for academic pursuit, but cashing on that footing to waste the scarce resources of the State and nourish individual pockets is ghastly vexatious and shocks to the marrow.

Lamenting over the award of fresh N9 billion when the ultra-modern prototype Secondary schools built by Amaechi have been abandoned to rot is flamboyant idiocy.

Tears will always row down the cheeks of travellers each time they pass through places such as Okehi in Etche, Ogbakiri in Emohua etc and find these sprawling projects which are over 80% complete overtaken by thick forests under a Governor who prides himself as Mr. Project.

Lamenting on how Wike out of myopic and shortsightedness destroyed the educational future of Rivers State a seasoned Journalist based in Lagos sent this text to me, “Chief, I will like to write on this, when you get it out! I was in one of the model schools at Eleme-Onne axis (Ambassador Nene Burubo Model School) during my recent visit to Rivers Statr and I wept at the crass neglect of the imposing facilities, due to bitter political rivalry since 2015”.

The party Chief said almost all the people oriented projects initiated under the government of Amaechi such as the Songhai Farms, Auto-Destruct Syringe project at Rumuosi, Etche Agric Village, Banana Plantation scheme, Fish farms among others suffer same fate.

He recalled how the Governor frustrated and stocked the futures of hundreds of Rivers sons and daughters studying abroad on scholarship in perpetual limbo after he cancelled the scholarship scheme initiatived by Amaechi.

A man with a complete human sense would ordinarily allow those already in the scheme abroad to complete and return home with their degrees, but Wike frustrated their chances and denied them the life time opportunity of building a future for themselves and the society.

Only a wicked father can pull the rug off the legs of his beloved children or remove the ladder from their legs atop a tall tree, only to chuckle in bizarre joy at how his children crashed on the hard floor and broke their heads.

He said it is an act of sheer financial recklessness and wasteful venture to build new campuses when the world-class twenty-four (24) model Secondary Schools built by the Chibuike Amaechi led state government across all local government areas in Rivers State and abandoned to rot under the current administration, can serve same purpose.

“Instead of wasting N9bn to build campuses of the RSU in three different LGAs costing N3bn each, Wike should rather use the N4Bn World Class Secondary Schools in each senatorial zone that have been abandoned under his watch, to serve the purpose”.

Chief Eze said given the classic infrastructure and their highly acclaimed architectural designs, the Secondary schools can only be equated to tertiary institutions because according to him, they were billed to be among the best in all facets in the world.

Having shown gross incompetence to comprehend the noble ideology behind the huge legacies of Rt. Hon. Dr. Amaechi in the education sector, Gov. Wike should do the State some good by putting those structures to use and channel the N9 billion into employment generation and empowerment which are the most pressing yearnings of Rivers people.

“Instead of allowing those structures to rot away and be dilapidated, Wike can do the State a lot of good by discarding his type of politics that are very unfavorable to the State and put these structures into proper use and convert the Billions in this regard into providing employment for our teeming unemployed youths and offset the Pension arrears accumulated by his administration”.

Eze said It was not for nothing that in 2014, Port Harcourt, the state capital under Amaechi, beat 10 other contenders including Oxford and Lyon to clinch the prestigious title of “World Book Capital”. The infrastructural revolution in education under the former Governor and other combinations earned the city the trophy.

The project is just a repetition of what is already on ground in each of the senatorial zones of the state and therefore, the current scheme will amount to nothing but an avenue for the Governor, his cronies, allies and agents to cash out big and reform their purses.

The Rivers State Government had on Wednesday, February 10, 2021, told the world how Gov Wike had released the sum of N16.6 billion for the so called upgrade of facilities at the Rivers Sate University (RSU).

Announcing the release to journalists in Port Harcourt, Rivers State Commissioner for Information and Communications, Paulinus Nsirim said N9 billion of that sum will serve as take-off grant for the establishment of new campuses of Rivers State University (RSU) in Ahoada, Emohua and Etche Local Government Areas.

One would have loved to see a situation where Government announced that it has found new use for the abandoned prototype Secondary Schools and turn them into campuses of the Rivers State University.

One would hardly believe that such super structures were for mere secondary schools, no matter the class. Eze thus wondered why such facilities could not be called RSU Campuses.

According to Wike, “N3 billion will be devoted to each of the new campuses for the construction of faculty buildings, hostels, offices, libraries, auditoriums, lecture halls and address other needs required for the campuses to operate maximally.” Eze however asked if these facilities and more were not already in the Amaechi Super schools.

Eze expressed further shock on the following statement from the Wike administration. “This is a landmark development in the history of the institution which has maintained one campus since its establishment in October 1980.

“With the establishment of the three campuses, the communities where they are sited will be opened up for consequential development and economic activities. It will reduce the rate of unemployment in the state.”

The erstwhile National Publicity Secretary of the nPDP wondered how what Wike wants to do is called landmark when he is rather pouring away N9Bn he would have used to set up economic schemes to lift Rivers youths out of poverty. He is using it to repeat what is on ground just to make sure he does not use what Amaechi did or to confuse people so he can write off billions of Naira.

“He is simply behaving like a new wife who locks out every household property her predecessor had painstakingly acquired for the family, just to wipe off her rivals’ footprints in the family.

Eze laughed at the claim by Wike that Rivers State is the only place where steady infrastructural development was still taking place around the world in the face of Covid-19 global slowdown. “We can agree that Rivers State is indeed one of such few busy places but Wike should have completed his statement by giving credit to his predecessor, Rt Hon Amaechi, who just handed down N78.9Bn to Rivers State at a time like this. Wike is using it to boost his political campaigns in the north with erratic donations of as high as N0.5Bn to one state and for starting mad projects such as N9Bn to repeats what Amaechi already did. He is throwing money away in such laughable methods.

Eze said the world knows that he just got N78.9Bn. What they are doing is to cheer him like a jester so that the prodigal son can give more, more and more to his cheering jeerers”.

Eze went on: “Those who love Wike and Rives State should arrest him, sit him down, if possible, and convince him to draw a plan, to state clearly what he wants to invest the huge FG Refund which Amaechi gave the state in. He should put over 80% of the funds into economic ventures that would create direct jobs and promote new Agro-economy to help out where oil stops. That is the best way to go, but will he listen?”

Eze regretted Wike’s style of jumping out of his closet once in a while to announce one huge amount he would spend without any sign of thoughtfulness and hard debate by his cowed Executive Council and the sleepy Rivers State House of Assembly, if they still exist.

Praying for the quick recovery of the State from the ruins of her crash under the current administration, the party Chief called on Rivers people to be strengthened by the hope of a better and greater state, offered by the Rivers APC, stressing that the case of the state is the fulfillment of the word of God as captured in Ecclesiastes 10:16 “woe to you, O land, when your King is childish and when your incompetent officials …feast in the morning”.

And as the Bible posited further in Isaiah 3:12 “childish leaders oppress my people …O my people, your leaders mislead you, they send you down the wrong road”, Eze said Wike has continued to mislead and misdirect the State in the pursuit of the insatiable desires of his venomous heart.

Eze therefore tasked the good people of Rivers State to stand up to their rights, fight and hold Gov. Wike to account for the ill-actions of his administration in line with the admonition of God in Surah 42:41 “all those that fight while oppressed incurs no guilt” and God shall punish the oppressors and a painful chastisement awaits them who subject the people to pains and penury.

Suspected herdsmen have killed two persons during an attack on men of the Ondo state security outfit codenamed Amotekun at the government forest reserve located at Ago Sanusi along Ute Road in Owo, area of…