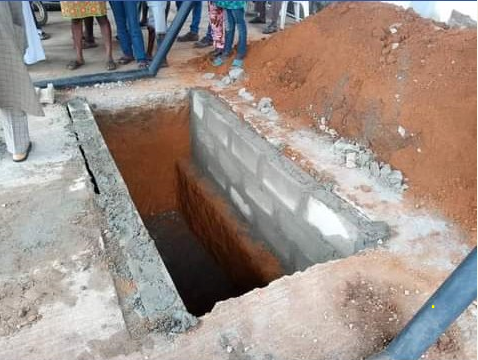 At exactly 12:50pm, the body of the former Ogun East Senator was lowered into the grave.

Kashamu was buried at his Ijebu-Igbo residence in Ogun State.

AUTHENTIC reports that the Ogun State Governor, Prince Dapo Abiodun had earlier paid a condolence visit to the family of the deceased Senator.

During the burial, hordes of sympathisers assembled at Ijebu-Igbo to pay their last respect to the chieftain of the Peoples Democratic Party (PDP).

Most people were seen crying profusely as they were yet to come to terms with the sudden of the man, who they described as a cheerful giver and philanthropist.

The Shodipe Kashamu family of Ijebu-Igbo, Ogun State, has announced the death of the patriarch of the family, Senator Buruji Kashamu.

Kashamu, 62, died at a private hospital in Lagos, after a brief battle with Coronavirus (COVID-19)

Senator Buruji Kashamu died on Saturday due to COVID-19 complications at a Lagos hospital.

Here are some things you should know about the late senator:

2. Kashamu was the Ogun State governorship candidate of the Peoples Democratic Party in the 2019 election.

3. He was indicted for conspiracy to import and distribute heroin in1998 by a grand jury in the Northern District of Illinois, US.

4. On December 18, 1998, the UK’s Metropolitan Police arrested Kashamu, who was travelling with a Benin passport.

5. He returned to Nigeria in 2003 from Britain after a British court refused a US extradition request over uncertainty about Kashamu’s identity.

6. Kashamu had told the court that he was not the leader of the drug-smuggling conspiracy but his brother, Adewale Kashamu, who he closely resembles.

7. 1n 2015, there was a stand-off at his residence after the National Drug Law Enforcement Agency attempted to arrest him for extradition to the US.

8. A federal high court in Abuja in May 2020, barred the FG from extraditing him.

9. He sued former president, Olusegun Obasanjo, for libel for stating that Kashamu was a fugitive from US justice.

10. Kashamu was the founder of Western Lotto Limited, one of Nigeria’s lottery operators.

The Founder and Senior Pastor, Latter Rain Assembly, Pastor Tunde Bakare, has rubbished the Presidency for comparing the …