Back to all posts
Home
/
News
/
ASUU on the verge of Ending Strike, Ngige expresses optimism 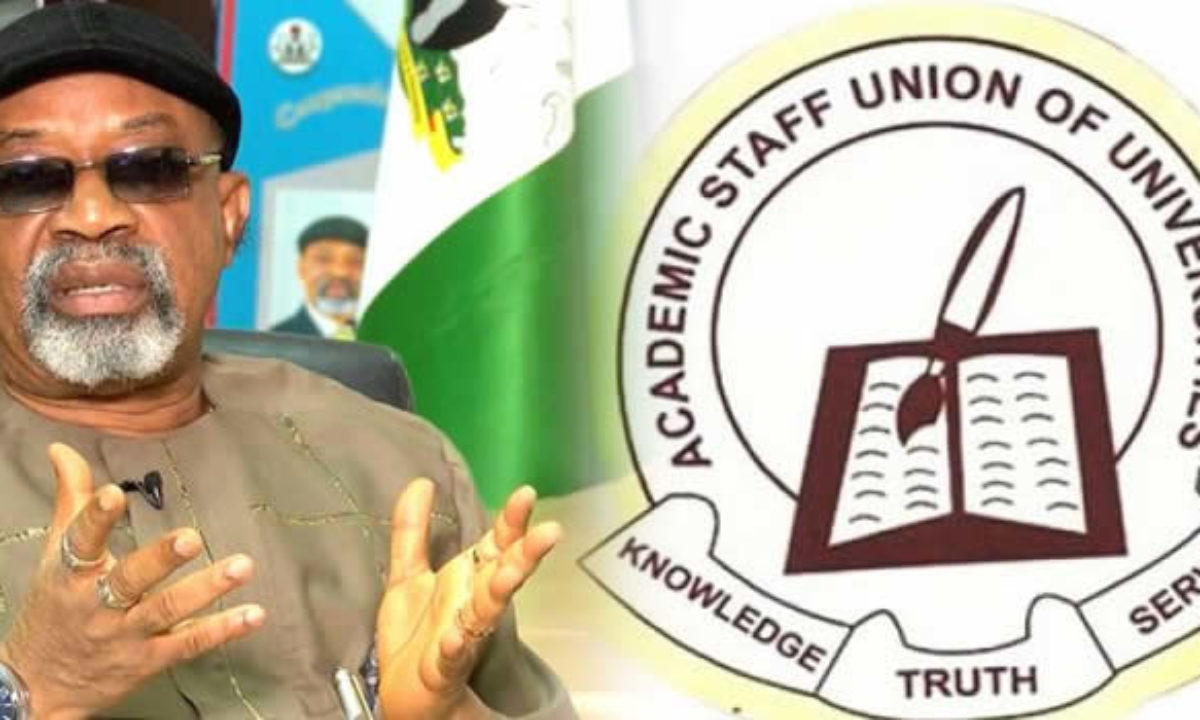 The Federal government on Friday continued negotiations with the Academic Staff Union of Universities (ASUU) to put an end to the eight-month-old strike action.

ASUU embarked on a nationwide strike on March 23 to demand “revitalisation allowance”, earned academic allowances, renegotiation of the 2009 agreement, visitation panels, among other demands.

AUTHENTIC reported how the federal government, last Friday, made some concessions to the striking university lecturers through their union.

The government offered N65 billion to Nigerian universities to address some of the lecturers’ demands.

The government also agreed to pay the lecturers their outstanding salaries using an older payment platform, GIFMIS, different from the controversial IPPIS.

The N65 billion seeks to address the issue of earned allowances and ”revitalisation of universities”.

Before the government introduced IPPIS to the union last year, the lecturers were receiving their pay through the Government Integrated Financial Management Information System (GIFMIS).

The Friday meeting, which was scheduled for 11 a.m. started at 2:25 p.m. with the labour minister, Chris Ngige, presiding.

He said the government gave the union some offers last week and “they promised to consult with their members and get back to us”.

“We pray for a fruitful discussion that will bring our children to school,” he said.

In his remark, the national president of ASUU, Biodun Ogunyemi, said the position of the union members had been documented and will be presented to the minister.

Mr Ngige declared the commencement of the technical session of the meeting at 2:35 p.m.

ACADEMIC Staff Union of Universities (ASUU) branches are divided over whether to accept the Federal Government’s offer and call off their eight-month-old strike.

The union will harmonise the positions of zones and branches at a meeting in Abuja today.

With some branches insisting that the government must meet all the demands before the strike is called off, the union may put the decision to a vote.

The branch, however, called for payment of the allowance before the strike will be called off.

Lecturers at the Federal University of Petroleum Resources (FUPRE), Delta State, said negotiations with the Federal Government must be concluded before the strike is called off.

Ezekiel Agbalagba, chairman of ASUU at the university, said the congress on Wednesday accepted the EAA, but rejected the N25 billion for the revitalisation of the varsities.

According to him, the latest concession by the Federal Government is “an offer”, adding: “Let it land in our purse first.”

He added: “We are willing to suspend the strike, but some of those contending issues should be thrashed and thrashed once.”

ASUU chapters of the University of Maiduguri, Yobe State University and Federal University Gashua resolved to get a serious commitment from the Federal Government before they call off the industrial action.

The Federal University of Agriculture, Makurdi (UAM) ASUU voted to continue with the strike action until the Federal Government implements what was offered during the negotiation.

ASUU- UAM chapter said both their withheld salaries and sundry allowances must be also paid.

A lecturer at UAM, who preferred not to be named, said they voted that the strike should continue until the government fulfils its part of the bargain.

After considering the reports, the leadership is expected to take a position and present it to the Federal Government.

A source said some of the congresses voted to call off the strike; others did not.

The source said the congresses agreed on the offers presented by the government to the union and with a timeframe to implement some of them.

The source added: “All the reports will come in today (yesterday) and we can make a decision on it.”

Last Friday, the Federal Government agreed with ASUU’s demand for payment of lecturers’ salaries from February to June through the old platform – the Government Integrated Financial and Management Information System.

The government said the exemption of ASUU from the Integrated Payroll and Personnel Information System (IPPIS) was temporary pending when the university lecturers will complete the development of its payment platform – the University Transparency and Accountability Solution (UTAS).

After weeks of negotiations, the government offered to raise the EAA from N30billion to N35billion and the revitalisation fund from N20billion to N25billion.

Cumulatively, the government, through the Accountant-General of the Federation, offered the lecturers N65 billion to call off the strike.

The government also shifted ground on some issues, including the insistence that all the academic staff of federal universities must be paid through the IPPIS platform.

The University of Ilorin (UNILORIN ASUU Chairman, Prof Moyosore Ajao, said the chapter was in alignment with the national body.

He said: “Our president will make a pronouncement on our resolution after our meeting tomorrow (today).”

A source at the ASUU UNILORIN meeting said the union resolved that “our salaries be paid and must henceforth not be stopped”.

“We also resolved that ASUU is not and cannot be on IPPIS,” he added.

Chairman of University of Jos chapter of ASUU, Dr Lazarus Maigoro, said: “We are under a strict directive from the national body not to release our resolutions yet.”

Sokoto Zonal Coordinator of ASUU, Dr Jamilu Shehu, told our correspondent that the zones are expected to make their positions known at the Abuja meeting.