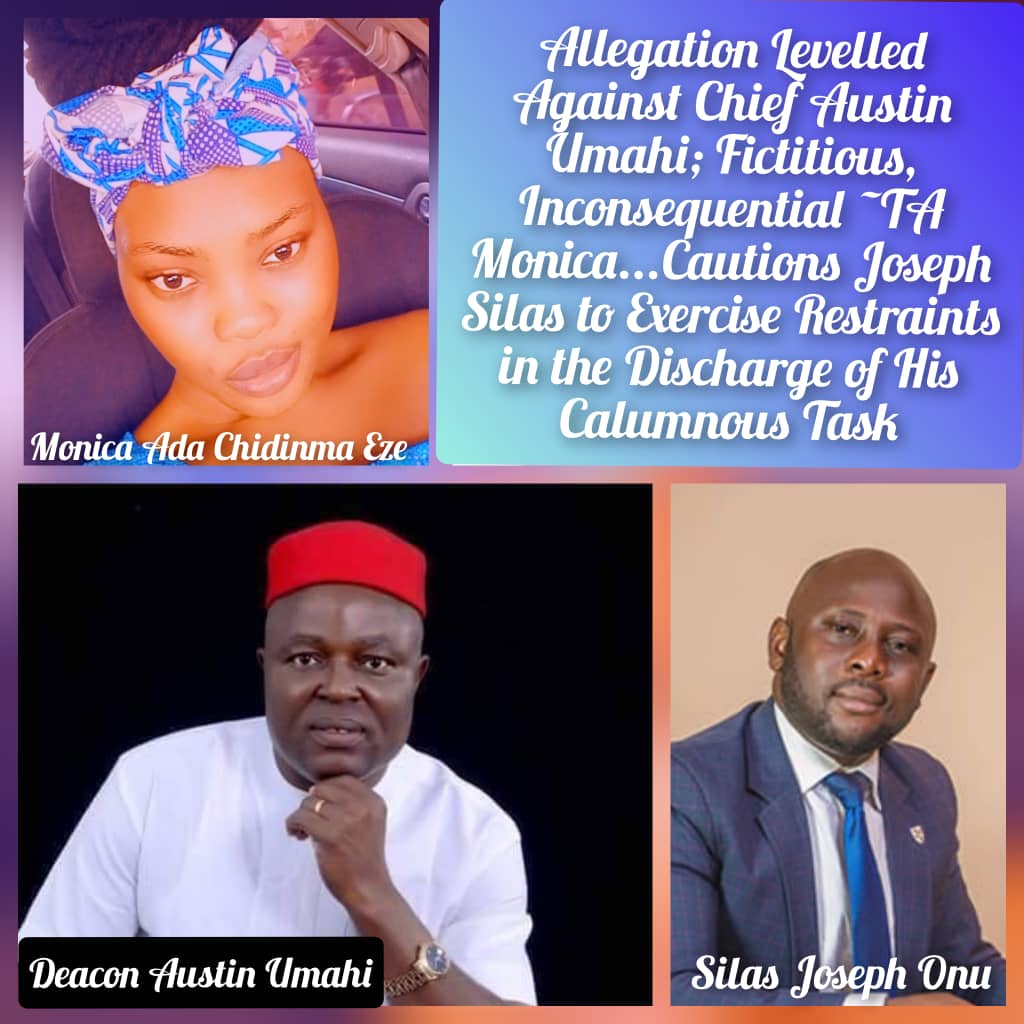 Lady Monica Chidinma Eze, Technical Assistant (TA) to the Executive Governor of Ebonyi State has expressed worries over the continued hounding of the Executive Governor of Ebonyi and other leaders of the All Progressives Congress in the state by professional hirelings conscripted and commissioned by detractors and leaders of the Ebonyi State Chapter of the Peoples Democratic Party to meddle impertinently and officiously into the business of governance and the private affairs of perceived political adversaries.

In a statement made available to media houses in Abakiliki, the Ebonyi State capital, Lady Monica Chidinma Ada Eze who also doubles as the founder and President of David Umahi Nweze Akubaraoha Ebonyi Transformation Agenda (DUNAETA), a grassroots NGO based in Abakaliki, the capital of Ebonyi State further highlighted although the right to free speech is sacrosanct, one must be wary not to offend another in the exercise of such constitutionally guaranteed right as the end of one’s right marks the beginning of another’s.

According to her, “Freedom of expression, also referred to as ‘free speech’ is one of the fundamental rights expressly provided for and recognized by the Nigerian Constitution as well as other regional Instruments and international treaties domesticated into the Nigerian body of laws for the preservation, and regulation of rights enjoyment especially, in a democracy such as ours, however, that right should neither be misconstrued nor abused.

Succinctly put, freedom of expression is the right a citizen has to express his opinions on socio-economic and political issues. It can also be said to be the right to criticize certain undesirable events, with the view to restoring sanity in the society.

Perhaps, Lady Monica said, it was this very right that one Silas Joseph; a self-opinionated nosy poker, an avowed busybody, an uncouth meddler and a snooping rabbit attempted to exercise, when he tried very hard but failed in what appears to be a clandestine scheme to discredit and taint the reputation of the former Deputy National Chairman of the Peoples Democratic Party (PDP), Deacon Austin Umahi, a composite gentleman whose works has earned him a pride of place in public esteem.

In an attempt to justify his little stipend which barely covers his personal upkeep and running costs, Lady Monica said the hireling, Mr. Silas, in a press statement which now commands wider circulation, alleged that Deacon Umahi was apprehended at the Abuja International Airport while traveling with about $20 Million.

Akin to the legal apothegm, “he who asserts must proof”, the Governor’s Aide said one would have loved to see a situation where Mr. Silas Joseph Onu, his financiers and co-conspirators garnished their cocktail with facts to establish their position on the mere preponderance of evidence.

Dismissing the report as a mere ‘stuff and nonsense’, TA Monica described it as the figment of the imagination of the author and his sponsors and called on the reading public to disregard Mr. Silas and the vilifying purport of his unfounded claim.

She said Chief Austin Umahi had similarly discountenanced the allegation in a recent parley with journalists, stressing that the former Deputy National Chairman of the PDP is a repository of the rare qualities that make a statesman and cannot be caught in the web of unceremonious engagements capable of robbing dirt on his clean image.

Lady Monica, aka Ada Ebonyi said Chief Umahi has been within the province of Ebonyi for some time, reasonably contributing his leadership skills and wealth of experience gathered from his years of international private sector engagements to the smooth sail of statecraft for public good.

It is noteworthy that since the exit of the Chairman of the South/East Governors Forum and the performing of Ebonyi State, Engr. Dave Umahi, from the People’s Democratic Party to the Progressives fold, members of the umbrella party have gone haywire so much so that one can validly infer that their ignoble tantrums and criticisms can at best be said to be sinister ravings of an imagination gone berserk.

TA Monica warned Mr. Silas and his PDP to exercise restraints in their schemed politics of smear campaign, targeted at disparaging and lowering the reputation of key government officials and leaders of the Ebonyi State Chapter of the All Progressives Congress, stressing that the law is always at a ready to intervene at the slightest manifestation of heinous intentions.

If we want to know how Dubai did it, let us ask them – Tonye Princewill tells youths

What informs your special interventions like the Youth Programs in Dubai & Ghana? Let’s look at Ghana and then Dubai. I took over 30 youths to Ghana and then picked the best and sponsored them…